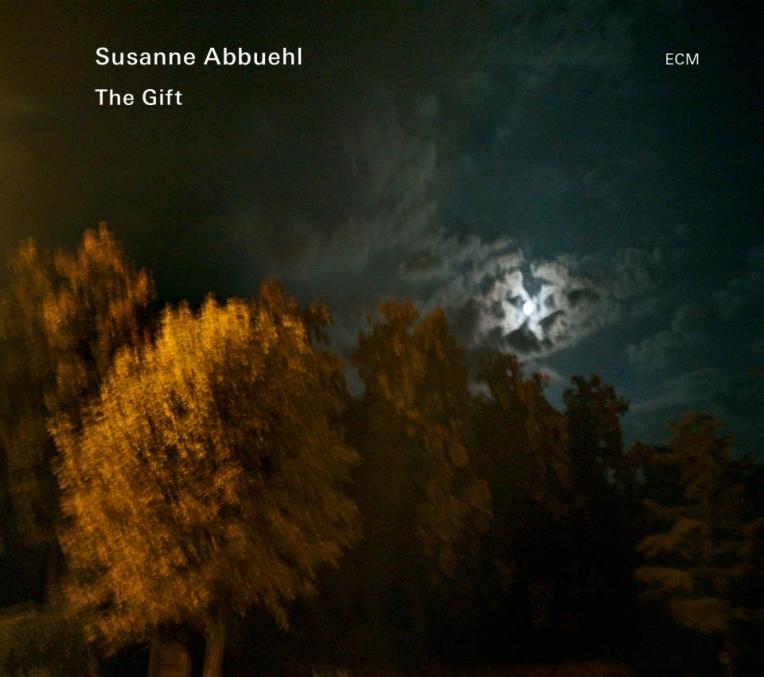 If April and Compass, the two previous ECM traversals from Swiss-Dutch singer Susanne Abbuehl, charted a journey, then The Gift is its destination. Important to understanding the experience of listening to any Abbuehl album, particularly this one, is welcoming her idiosyncratic approach to poetry. These songs overflow with words from Emily Dickinson, Sara Teasdale, Emily Brontë, and Wallace Stevens. Rather than simply add music to them as would a jeweler bend miniscule claws around a diamond, she lets the verses walk around inside her before their spirits leave her lips.

This time she incorporates her unique delivery into an even more attuned matrix. Pianist Wolfert Brederode and drummer Olavi Louhivuori sprout rhythmic branches that are every bit as melodic as her roots. But the flugelhorn of Matthieu Michel is what really sets this session apart from its predecessors. It’s a defining presence on the album where the clarinets of Christof May were before. Its rounded tone is a voice unto itself, swooning through the corridors of Abbuehl’s sole lyric contribution in “Soon (Five Years Ago).” This song, appropriately enough about the displacement of earthly time, may appear late in the program, but it’s also its defining statement of it.

Fans of Norma Winstone will surely rejoice at the freedom of Abbuehl’s approach, exemplified to peak effect in “The Cloud,” which opens in reverie. Activated by a kalimba’s metallic fingertips, her voice carries word and song along the trumpet’s cirrus drift. It is a restless feeling we counter here, one that remains in all that follows, so that even the simple admission of Dickinson’s “This And My Heart” (and its variation, which ends the album) harbors a shadow or two. We might feel this also in the arrangement, which engages voice and flugelhorn in marriages, divorces, and flirtatious commentaries. All the while, a processional feeling soaks through. Where the first song was emblematic for its atmosphere, so is this for an attention to detail by means of which Abbuehl and her band embody a conception of self that, so like a book, opens and flutters with the dynamism of language. From the mountains to the catacombs, it’s all here.

In light of such intensities, “If Bees Are Few” makes for an airy interlude, suspended as if above prairies misty with dandelion fluff. It closes its eyes and enters the dream that is “My River Runs To You.” Across this canvas of love, magical by way of lyric and music alike, the ocean paints itself into a network of inlets, each a harbor waiting for that one boat to make permanent docking. The effect is such that “Ashore At Last” breathes like a mission statement to the fanfare of its free and melodious flugelhorn. “Forbidden Fruit,” then, seems to close the circle of a miniature trilogy of sorts, swaying with all the gentle relief of a silhouetted tree against the night.

Indeed, for all its leaping heartbeats, much of The Gift is cradled in nocturnal contours and through them are revealed Abbuehl’s purest tones. In “By Day, By Night,” her voice is flute-like and devoid of vibrato, its waters as crystalline as those of time are muddied. Even in those passages in which she doesn’t sing, her spirit animates every reflection. In this sense, Stevens echoes farthest: “In my room, the world is beyond my understanding.” Holding to this philosophy, the album’s brightest moments are revealed where one might nominally least expect them: in “Shadows On Shadows.” Brontë’s imagery unfolds a scintillating act of transparency. It is the album’s lighthouse, but might remain unlit were it not for the embers of Abbuehl’s wonderful musicians. “Fall, Leaves, Fall” is the epitome of their sensitive approach. This song of death, haunted by an Indian harmonium and drummed whispers, is a prayer of sisterly forces. “Sepal” emerges from a landscape’s worth of flora and uncommon graces as a single petal falling, a light footstep without a trace except in the utterances of she who observes and vocalizes them into memory, as memory.

Understated yet full as a rose in bloom, this is the emotional clarity of which Abbuehl’s craft is possessed apart. In her purview, the moon disappears not when it is new, but when it hides beyond that most ephemeral of horizons: the human heart. It is a shadow of its own truth, a truth given understanding by Teasdale after all:

I throw my mantle over the moon
And I blind the sun on his throne at noon,
Nothing can tame me, nothing can bind,
I am a child of the heartless wind—
But oh the pines on the mountain’s crest
Whispering always, “Rest, rest.”