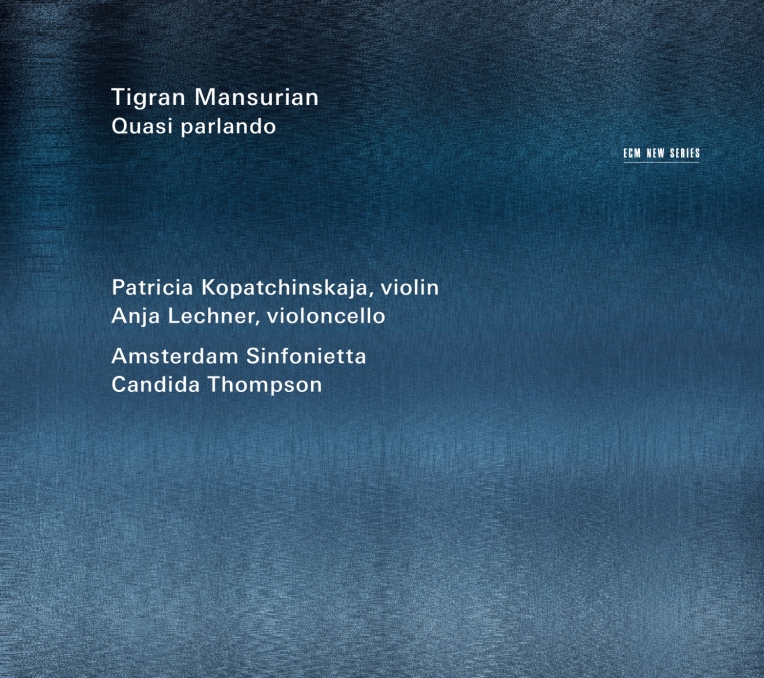 ECM’s ongoing relationship with Tigran Mansurian yields what is perhaps the Armenian composer’s most integral archive yet. In a program of works spanning nearly three and a half decades, Quasi parlando brings together a roster of committed interpreters—musicians who live and breathe in order to allow the music of underrepresented composers that same privilege on an international stage. Yet if the image of a stage seems too formal for music that emerges as a butterfly from its chrysalis, it’s because Mansurian does not write music to be validated by the fleeting sanctity of the concert hall. Rather, he builds it as a craftsman would a piece of furniture, so that every joint fits without need for the glue of representation. In this respect, analogies fall short of his mastery even as they feel necessary to make sense of the darkness therein.

Patricia Kopatchinskaja and Anja Lechner are the respective soloists of the Double Concerto for violin, violoncello and string orchestra. Composed in 1978, it is the earliest work on the program and consists of two Largo movements. The first, marked “concentrando” (indicating an intensification of tone over time), is a concentric maze from opposite sides of which the lone cello and barely dancing violin seek an interactive center. Even when distanced by walls and dead ends, they share a certain elasticity of purpose that inhales even as it exhales. Only when the internal geometries of their capture begin to waver in the emerging chaos do open double stops cry through barriers toward their asymptotic meeting. Each instrument occupies its space at intervals of unaccompanied reset, inspiring the orchestra to unravel itself, one vine at a time. Yet where the effect here is exponential in the manner of a Fibonacci sequence, the second movement follows its designation of “sostenuto” (sustained) by means of a rhythmic core. From this extend tendrils of memory, guiding a single droplet of experience from mountaintop to river. A resolute tenderness ensues, creating suspension in a dream of lucid impulse.

The two pieces that follow are the disc’s most recent. Romance (2011) for violin and string orchestra once again features Kopatchinskaja, to whom it is also dedicated. In characteristic fashion, Mansurian constantly shifts the role of soloist and orchestra, as if between cause and effect, or among tiles in a sliding puzzle. Each aspect of its ungraspable emotions has the constitution of an after-effect. Kopatchinskaja emphasizes this and so much more, treating her bow as kindling to a growing fire that looses controlled tongues in every unaccompanied breath. The 2012 title composition for violoncello and string orchestra also bears dedication to its soloist. Lechner’s role, however, is more integrated, very much a part of the ecosystem in which it finds itself. Though possessed of a kindred robustness in its unaccompanied passages, the writing for cello abides by an even more self-directed faith in its own surroundings. There are quiet triumphs in this piece, intersections of light and cloud that stay locked in place through the simple act of acknowledging them, left to drift only by the final pizzicato strum.

Mansurian’s Second Violin Concerto carries the subtitle “Four Serious Songs” (2006), a translucent bridge perhaps to Johannes Brahms’s scriptural settings of the same name. Compared to the music that came before, these movements come across with consistency. Denser and of more mournful quality, they morph from teeth to ribbons toward a final, subterranean resolve, following the magma to its womb.

If Mansurian’s corpus is a truth, then we are its clothing of mystery. It hides nothing of itself, but is hidden by our knowing of it. Let this be a lesson, then, unto the hit-and-run listener: you will leave a scar unless you tend to the wound of your interruption.