As of late, ECM’s New Series imprint seems to be on a mission to prove that impressionism in classical music is, if anything, an exercise in clarity. This has been the message behind such releases as Tre Voci and Alexei Lubimov’s account of the Debussy Préludes. Joining these debunkers is distinguished pianist Momo Kodama, whose first solo recital for the label is sublime as crystal.

The title (which translates to “The valley of the bells”) of her characteristic program comes from Maurice Ravel’s Miroirs. This five-part gallery of expressionist vignettes wants for nothing in environmental fidelity. Each is an embodiment of its image, and then some. The first two pieces, “Noctuelles” (Night moths) and “Oiseaux tristes” (Sorrowful birds), are together a study in contrasts, juxtaposing the former’s dreamlike wing-beats, which by slightest touch of pond’s surface scatter minnows in sunbursts of activity, and the latter’s methodical gravidity, which transgresses memory like a cigarette through silk. Already obvious at this point is Kodama’s meticulous pressure, her balancing of strength and fragility. She adds leagues to “Une barque sur l’océan” (A boat on the ocean). Like a ballerina dissolving one cell at a time, it pirouettes into a dream of wind and sail, as if one were the inverse of the other. “Alborada del gracioso” (Mornign song of the jester), on the other hand, has a Spanish flavor, made all the more vibrant for its dissonances and reflective detours, while the final bells make for some strangely provocative reflections. 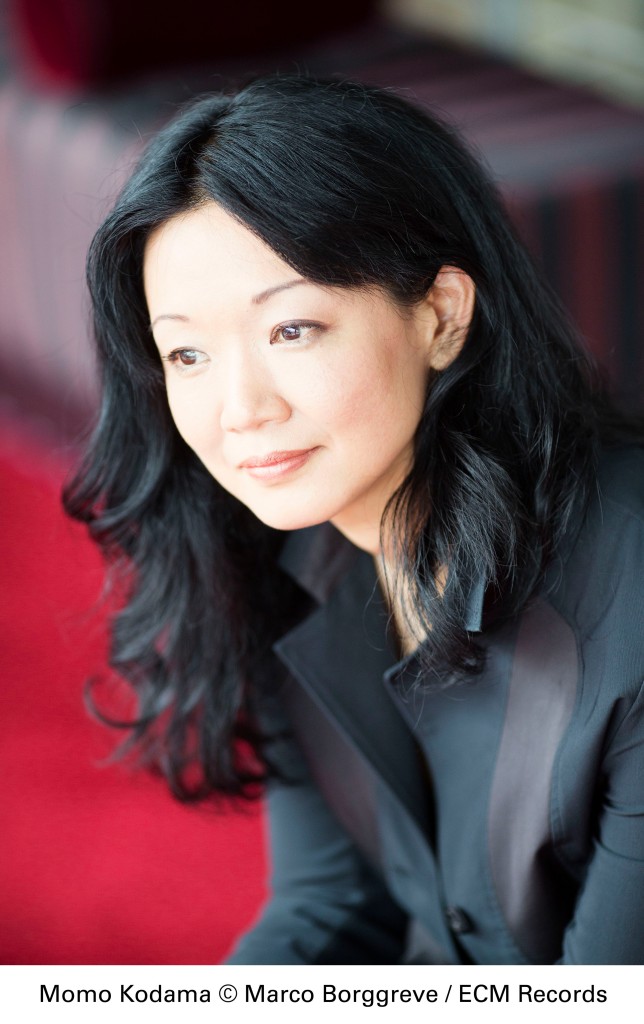 At the other end of the album’s spectrum is Olivier Messiaen, a composer close to Kodama’s heart and whose La fauvette des jardins is a wonder. Something of an extension of the Catalogue d’oiseaux, a recording of which Kodama released to great acclaim on the Triton label in 2011, it presents formidable challenges to the musician by way of its affective variety. An ashen foundation in the piano’s lower register contrasts and diffuses the upward motions that follow, lighting the way with the breath of a thousand torches. Its paroxysms are decidedly spiritual. Through them salvation sings with the notecraft of insects. A restlessness of servitude pervades. It speaks through contact of flesh and bone, not tongue and breath. The piece’s negotiation of the progressive and the regressive is ideally suited to Kodama, who transforms its turbulence into an opportunity for reflection, such that its consonances feel exhausting in their orthodoxy.

Considering that Tōru Takemitsu was such a great admirer of both Debussy and Messiaen, his Rain Tree Sketch makes for effortless company. Occupying as it does the center of the program, one might feel tempted to read it as filler or segue from one French master to the other. In Kodama’s practice, however, it holds its own as a robust work of art. Takemitsu was, of course, a prolific film composer in his native Japan, and his experiences in that capacity seems to have carried over into his later works, of which this is but one evocative example. The illustrative strengths explored in the work introduce another relationship of balance into Kodama’s toolkit—this between circular and linear forms—and does so with meditative attention paid to the underlying touch of things. Like the musician herself, Takemitsu’s idea of a sketch is full enough to be called consummate.