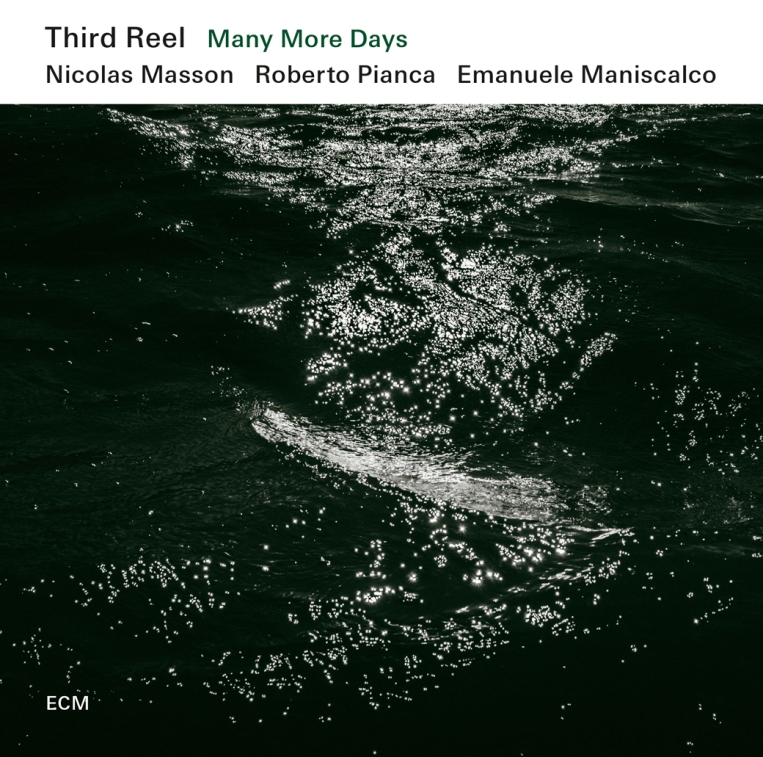 One might characterize multi-reedist Nicolas Masson, guitarist Roberto Pianca, and drummer Emanuele Maniscalco—a.k.a. Third Reel—as having carved a niche for themselves. Truer to say they’ve painted a context around that niche, which has taken shape from sheer formlessness into a tributary, emptying into a sea of shadows. Shadows, because the trio’s gestures seem to grow only darker with time, denying the convenience of light in favor of what can be felt in its absence.

If Third Reel’s self-titled ECM debut was the sun, then Many More Days is its corona, a dream to the former’s waking and a push toward those regions of the psyche wherein eddy fresh rhythmic motives. Days thus feels distinctly microscopic compared to its predecessor, even as it seems to travel farther. “For the first album we deliberately chose to almost never play a strict tempo,” Masson tells between sound and space, “we wanted to explore different ways to play in a very organic, non-linear way. For the second album, we wanted to keep the idea of short pieces, the same basic approach to interacting together, the same flow but with a more defined contour.” Along with the album’s temporal coming of age is the internal addition of Maniscalco’s pianism, which, Masson notes, hints at a chamber music aesthetic that sheds a few layers of jazz toward an art form less interested in genre than in generation.

Maniscalco yields a sizable share of the album’s compositions, ranging from the strangely comforting aneurysms of “Afterwards” to the burnished sounds of “Two-Part Chorale.” Such titles indicate a reflexive naming process. And yet, wherever they might fall into their respective slots, one knows the sacredness of their urgency, which apportions equal value to density and dissolution. Relationships between clarinet and piano or tenor saxophone and drums treat the album’s nervous system as a map to be rewritten. Pianca’s spider-veined chords in “Fourth Reel” and surface tensions in “Gilberto Stimmung” enhance the anatomical aspect, receding but never gone, even in the quiet foray of “Strand.” Each note is an eye in search of a face.

Although the two albums are different, I tell Masson they share a common approach to performance, which feels “bacterial,” as if every composed theme were a culture in a petri dish allowed to germinate and grow until it becomes its own unexpected entity. Though he agrees with this analogy, he cautions against painting Third Reel with a single brush:

“Most of the written material has no preconceived scenario, can be used for different musical purposes, and can take various forms according to the needs of a set or simply the inspiration of the moment. We’re trying to maintain an instinctive approach to the interpretation of our compositions, which are conceived with this idea in mind from the beginning. We’re all writing music for the trio, so I’m only speaking for myself, but in fact many times the idea I had in mind when composing was quite different from the results. We’re trying to leave enough space in our compositions to allow for multiple interpretations and developments. It is true that some pieces have a life of their own—we bring a few dots on a piece music paper and we just let them grow as we play. However, we don’t restrict ourselves to a single concept. If a tune feels complete by just reading it from top to bottom, without improvisations or variations, it’s also fine.”

While such openness might lead to chaos and wildness in the hands of others, in theirs it blossoms in thoughtful radiation. Masson’s own compositions, in particular the emblematic “Simple,” are self-deciphering codes—in other words, pieces that ask nothing of us in return for their admissions except our willingness to hear them as they are. Masson’s writing frames an organic triptych lodged in the album’s center. His “White” was inspired by Masabumi Kikuchi’s Sunrise, to which one may liken a kindred contemplation, while the title track follows clearer peaks and valleys. The same combination of drums, guitar, and saxophone graces Pianca’s “Happy People,” which nestles itself between them in a mosaic of endearing immediacy. Masson observes in retrospect how these three pieces “mark a turning point in the album’s dramaturgy, from the more intimate, chamber music-like pieces to the more expressive, lyrical pieces,” and the attentive listener is sure to feel this shift in visceral spades.

Between the parabolic “Hill” and the galactic compressions of “Fast Forward,” Masson’s pieces underscore Third Reel’s commitment to let the music go on only as long as it wants to. Each track, no matter how short, precludes the need for elaboration or reduction. I asked Masson whether any given performance of a particular piece influences its duration in real time, or where the band has a sense about how long a piece should go beforehand, to which he responded:

“The performance and the moment has a direct influence on a given piece’s duration, whether it is 2 or 20 minutes long. When we play live, we often connect compositions with open improvisations and therefore what is written becomes part of a bigger piece, like musical crossings to change direction and explore new territories. In the studio, however, we approached the material more with the idea of playing miniatures, each one of them being like a microcosm belonging to a bigger system or characters in a story. The studio in which we recorded both albums also played a good part in the outcome. We recorded at Swiss Radio’s Auditorio Stelio Molo in Lugano, Switzerland. The studio is actually a large wooden concert room designed primarily for classical music. It has beautiful acoustic qualities, with lots of reverb. This room is very inspiring, and the sound so detailed there, that it made us extremely cautious of the slightest changes in dynamics and sound textures. It definitely helped us being focused on the balance of each song. We tried to play only what we felt was necessary.”

Video from the CD release concert at Scnaffhauser Jazz Festival:

In the context of the Lugano studio, we can thank and acknowledge engineer Lara Persia, who may or may not be the subject of “Lara’s Song.” Either way, this piece, written by Pianca, does have something of the technician’s presence about it, the lone silhouette at the mixing board, her hands moving about the knobs and buttons to bring out the moment of the moment. It is therefore, and above all, a song of trust, an opening of newborn eyes, a quiet resignation into being in the world and its many purposes of living.

Behind it all, of course, is producer Manfred Eicher, whose tireless commitment to new music is expressly realized in this project. Indeed, Masson credits Eicher and ECM for playing no small role in the band’s evolution. “Working with Manfred Eicher as a producer is a unique experience,” he says, echoing many others in the sentiment, “and I think he helped us reveal a part of our musical personality and take it to the next level. However, playing live is still another story than making a studio recording, we stretch out more in concert, we’re taking more risks. We’re still experimenting but our musical identity got stronger and I personally feel more confident in what I have to offer.” That said, there is plenty of confidence in the dramaturgy of Days, proceeding as it does with such unhurried graciousness. With it, Masson and his bandmates have assured their place in the label’s history, from which key records by Paul Motian, Dewey Redman, Don Cherry, Keith Jarrett, Bill Frisell, Joe Lovano, and many others have fed into Third Reel’s dedication to liberty and abiding integrity of sound.

(To hear samples of Many More Days in its studio form, click here.)