Surrounded by Sea marks the fifth ECM appearance by English saxophonist Andy Sheppard. To the configuration of bassist Michel Benita and drummer Sebastian Rochford (with whom he previously recorded as Trio Libero) he now welcomes the ambient touch of guitarist Eivind Aarset. The latter, perhaps more than any other, evokes the encompassing waters of the album’s title, and draws on the relationship formed on Sheppard’s ECM debut, Movements in Colour. 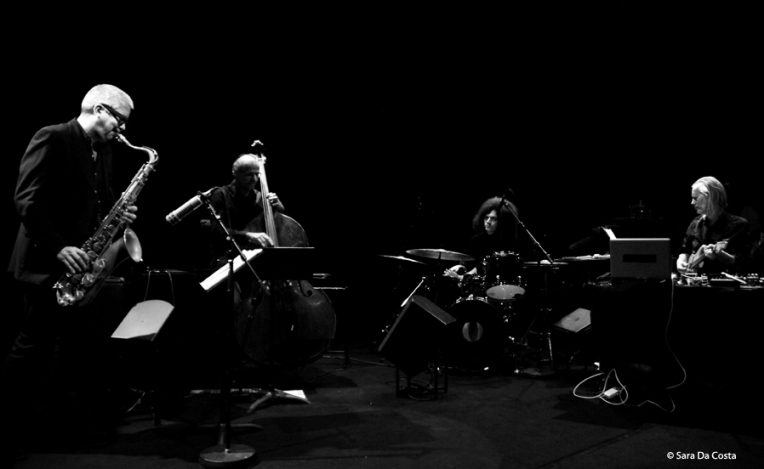 Emphasis sides with Sheppard’s compositions, which have the first and final word on Surrounded by Sea. “Tipping Point,” co-written with Benita, opens the set on a distant shore. Given its delicate bass ostinato and cavernous sustains (courtesy of Aarset), one could be forgiven in mistaking it for Arild Andersen’s Hyperborean. But tenor and drums paint a clearly different picture, Sheppard working his blemish-less magic into the fade-in. Intensely melodic yet never overwhelming, he balances mild and sharp like a chef aiming to please as many diners as possible without losing his originality. Already we can tell this will be a fruitful leap inward for the saxophonist, as well as a memorable masterstroke of overall production, writing, and performance that never wavers on its way toward the closing “Looking For Ornette,” which shines all the more poignantly in the wake of its namesake’s recent death. Sheppard cites Coleman as a towering influence, but one may also detect a little of Lee Konitz (cf. Angel Song) in the playing.

Between these two signposts, Sheppard’s new quartet charts the melodic valleys between his mountainous originals. Both “Origin Of Species” and “Medication” spotlight Benita’s versatile stylistics, ranging from starkly original contemplations to Eberhard Weber-like infrastructures. Each theme is stretched like taffy into an intensely flavored ocean for Sheppard’s vessels, which find their grooves in the motions of the waves. Two further tunes—“The Impossibility Of Silence” and “I See Your Eyes Before Me”—are by comparison more bodily than environmental, steeping in the viscosity of Aarset’s magic and drawing nourishment from Rochford’s carefully knotted roots.

Bassist and drummer each contribute their own tunes, which between the David Lynchean swagger of Benita’s “A Letter” and the psychedelic charge of Rochford’s “They Aren’t Perfect And Neither Am I” forge a wide spectrum of emotional courage. It’s as if every mood were a skin the band as a whole could put on and take off at will, just as the sky dons and discards shades from dusk to dawn. In that same spirit of variation, the quartet pays homage to the unexpected in an atmospheric rendition of Elvis Costello’s “I Want To Vanish,” in which Sheppard’s soprano, as windswept as the grasslands, settles into the comforts of brushed drums and more selective bassing. As in the traditional Gaelic “Aoidh, Na Dean Cadal Idir” (Aoidh, Don’t Sleep At All), scattered in three parts throughout the album, Sheppard and his companions make every note count. But like Pi, we need only know the first few numbers after the decimal to recognize their infinite potential.

(To hear samples of Surrounded by Sea, click here.)