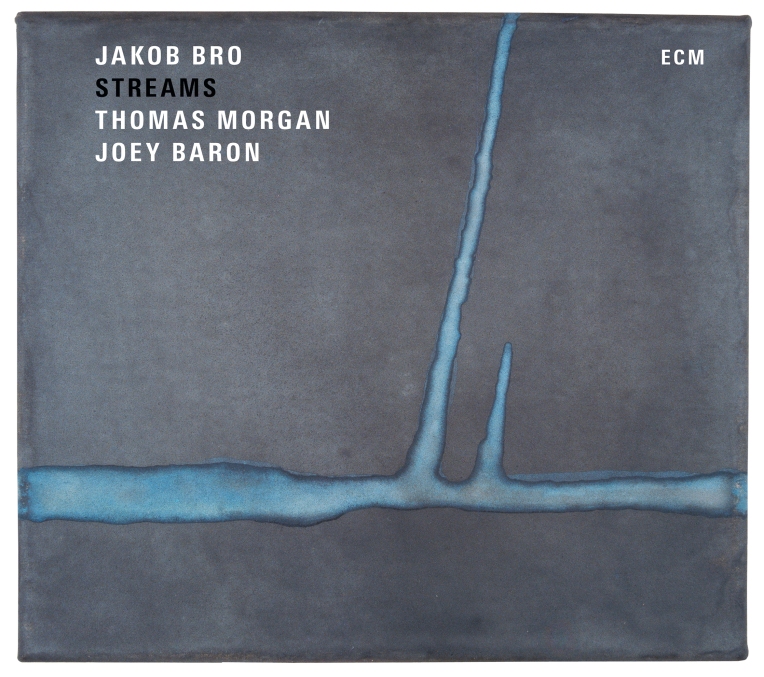 The title of Streams, guitarist Jakob Bro’s second leader date for ECM, could hardly be more appropriate to describe music that flows with the quiet charm of a forest creek, bubbling all the way from childhood to whatever here and now you happen to inhabit when encountering it.

“Opal” touchingly opens the album’s inner sanctum: a sacred gift for profane times. As the first of seven layers, it peels back just enough of life’s opacity to sense a shared humanity deeper within. Bro zooms in on filaments of memory, each a wire drawn from one biographical telephone pole to another. Bassist Thomas Morgan is so attuned to these electrical impulses that the possibility of a power outage seems a distant fantasy. Drummer Joey Baron marks their trail with care, ending with raindrops on a silo.

“Heroines” is one of Bro’s most patient confections. Morgan shuttles through the composer’s loom, soloing with restraint and focus, while the guitar folds itself in layers of cosmic radiation until the night itself begins to glow. This tune is further recast in a solo guitar version later in the set. Like a plant regressing to seed, it has all the world in its mouth before it opens to sing.

“PM Dream” is a free improvisation dedicated to Paul Motian. As in the music of its namesake, its heart beats somewhere between veiled ambience and solid ground. Morgan and Baron dot its continent with runes of memory, as they do in “Full Moon Europa,” which through its quiet substructure yields achingly dramatic elicitations from Bro. “Shell Pink” is another stunner, tracing its nautilus spiral into origins. Morgan is wonderous and sincere, enhancing that locomotive quality, inherent to all of Bro’s finest, along a parabola of ice to fire to ice.

Nowhere is geologic force so thoroughly studied as in “Sisimiut.” Where normally Bro is more interested in following a burning fuse than chronicling the explosion it foreshadows, this time he allows a little of that fire to spill over. But because destruction would be antithetical to the loving atmosphere he has so painstakingly created, we never encounter a bang, going out instead with a hush.