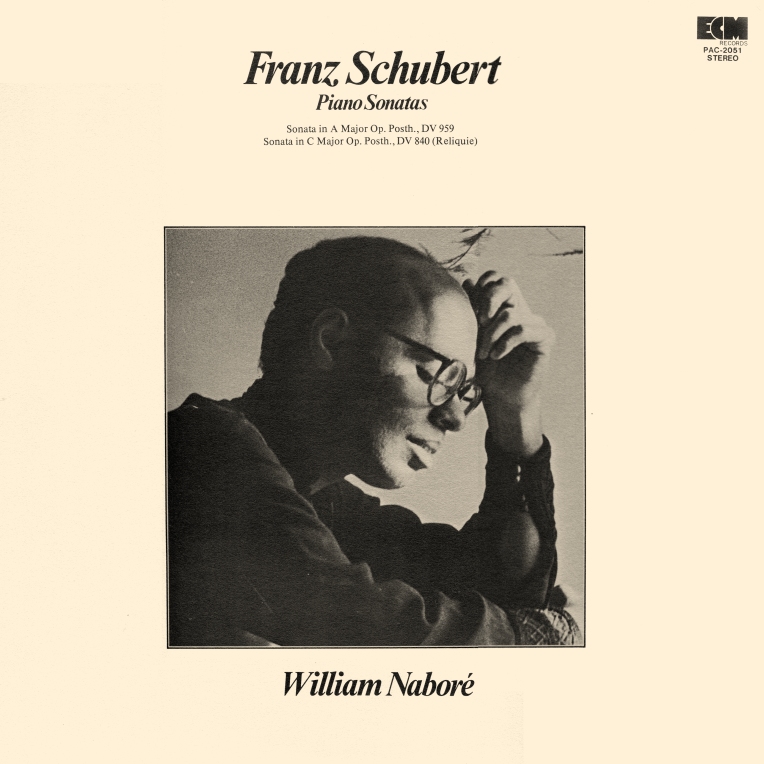 When ECM recorded Valery Afanassiev performing at the 1985 Lockenhaus Festival, it would be label’s first intersection with Schubert after its classical-leaning New Series imprint went into effect. Sadly, that recording didn’t see daylight until 1998. Still, it set a benchmark for future New Series way stations in the ongoing Schubertian journey that has since unfolded. But ECM and Schubert have an even deeper relationship going back to 1976, when Virginia-born pianist William Naboré made this rare recording (distributed in Japan on Trio Records) at Ludwigsburg’s Tonstudio Bauer under the direction of producer Manfred Eicher and engineer Martin Wieland. In a way, Afanassiev picked up where Naboré left off, taking on Schubert’s posthumous opus DV 960 in B-flat Major, while this album begins with DV 959 in A Major. Naboré’s reading of the latter is as distinguished as anyone familiar with his playing will expect. It’s also chock-full of selectively applied exuberance, especially in the righthanded tone clusters of the Andantino. Before that, however, a faintly Mozartian take on the opening Allegro lends insight into a player who reinforces the architecture of what came before so that he might have the most artful support possible for his sometimes-acrobatic bursts of whimsy. In that precise vein, his rendering of the third movement—a delicate Scherzo—is exquisitely detailed. The final Rondo-into-Allegretto speaks of a composer who, at the end of his short life, had already perfected the sonata form as he understood it to the point of breathing it out onto the page, despite his rapidly waning health, and of a performer who, only a few years older than Schubert himself when he wrote it, understands this music as if it were his own.

By the time of this recording, as Naboré himself observes in an album note, apocryphal impulses had crept their way into the hands of many a Schubert interpreter. “The Schubert sonatas,” he writes, “are addressed to the imagination and need no such props to validate their existence.” True to his assessment, Naboré uses steadfast restraint as a source of illumination from within rather than elaboration from without, as is especially the case in this program’s second half. The C Major Sonata, DV 840, was composed in 1825 and bears the title “Reliquie” (referring to its unfinished state, as only two full movements survive). Nevertheless, the initiatory Moderato is in no way diminished by its power of execution in this most fundamental of tonalities. There’s a geometrical quality to be experienced that holds its breath throughout the Andante that follows. Though no less dramatic than its predecessor, the mood is subtler in its urging. Thus, the intimacy of this recording (and of the instrument it captures) only enhances the grandeur of Schubert’s spirit (and Naboré’s ability to extract it).