Over 40 years of friendship and collaboration exist between guitarist John Scofield and his mentor, bassist Steve Swallow. But everything that happens here is in and of the moment. Playing the room with drummer Bill Stewart, they slowly unwrap one candy after another in the form of Swallow’s own timeless compositions. About them, Scofield says in this album’s press release: “They’re grounded in reality with cadences that make sense. They’re never just intellectual exercises, and they’re so melodic. They’re all songs, rather than ‘pieces.’ They could all be sung.” And sing the trio does in its own wordless way, drawing out less obvious nuances from familiar melodies and vice versa.

Between the laid-back groove of “She Was Young” and the slicker lockstep of “Radio,” an understated allure wiggles its way into the heart and nods to every beat. Along the way, each musician lays out a personal reflection of his métier. Scofield abounds in contrasts, bringing a hardened edge to the shadows of a ballad like “Away” just as comfortably as he dances light-footedly across the terrains of “Falling.” The latter is also a showcase for Swallow’s unerring sense of purpose and Baroque approach to syncopation, as is “Hullo Bolinas,” in which his soloing embraces retrospective charm. 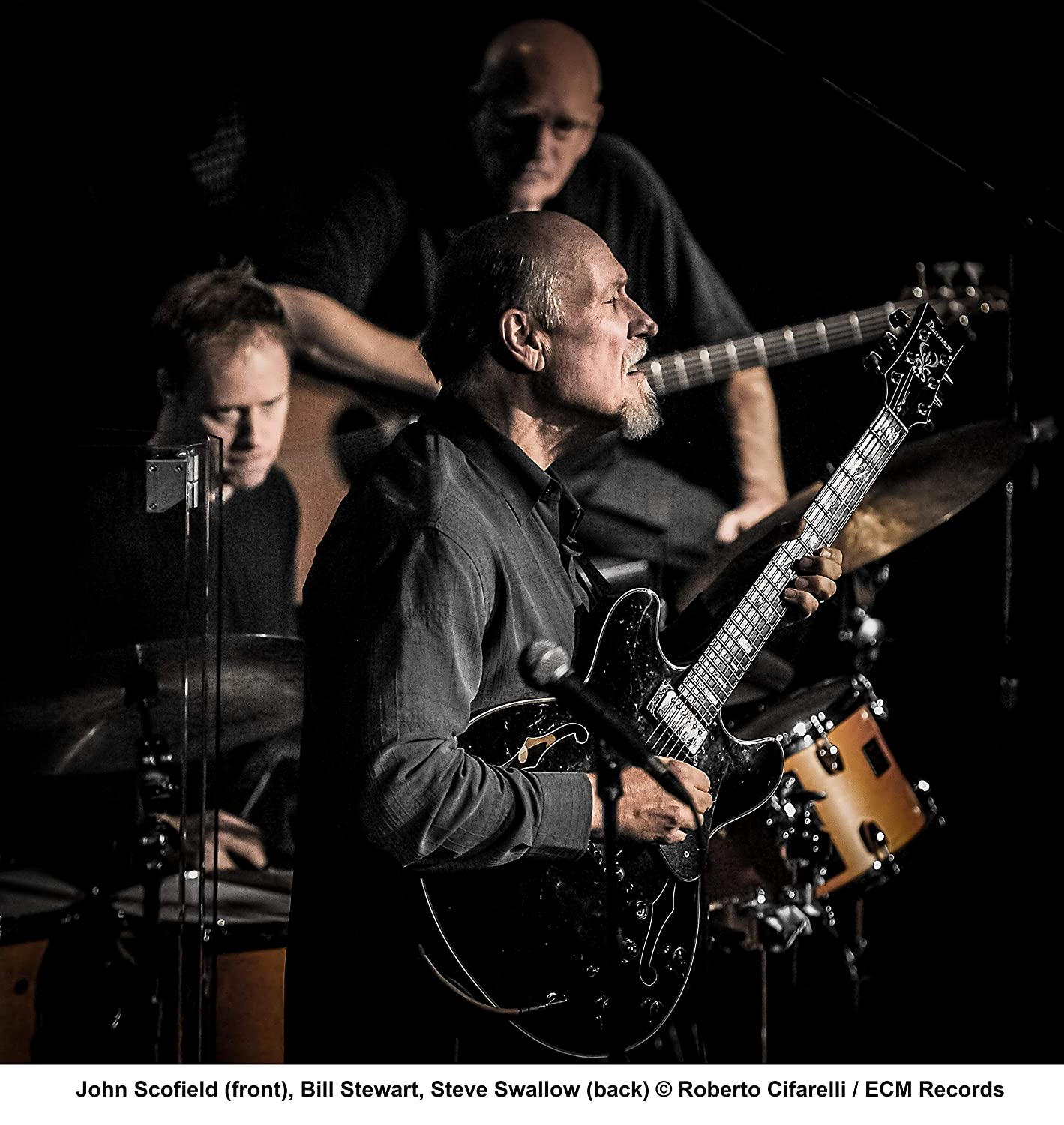 But while the guitarist and bassist are true masters of their craft, it’s Stewart who holds my attention most throughout this swiftly realized session (the result of only four hours in the recording studio). The drummer’s glittering cymbals and rustic snare strike just the right balance, catching every detail of “Portsmouth Figurations” and extending its effect before it fades, luxuriating in a decaf version of “Awful Coffee” (a normally peppier tune), and bringing freshness to “Eiderdown” (the first tune Swallow ever wrote). But his grandest slam is in the opening breaks and leaping denouement of “In F”—a performance only decades of experience could yield.

And while each track comes preloaded with its own history (“She Was Young” being originally sung by Sheila Jordan on 1980’s Home and “Portsmouth Figurations” dating back to 1967’s Duster by Gary Burton), they make new history here in the present arrangement. And here we are, sitting on what feels like the wrong side of the fence, trying to make things right by holding on to that which shines a light on the inside. Thankfully, music like this hands us a match, already lit and waiting for our attention to lend it a fuse.