Too much time, it seems, has passed since pianist Marcin Wasilewski and his trio with bassist Slawomir Kurkiewicz and drummer Michal Miskiewicz graced the studio for our privileged scrutiny, and as soon as “Glimmer Of Hope” tickles the ear drum, we are reuniting with old friends. A glimmer is exactly what we encounter in Wasilewski’s pianism, which opens this tender vision with a play of light and shadow such as only he can render. In turning these movements into song, he opens a new portal through which to step on our way toward musical discovery. But then a new companion in Joe Lovano joins the shoulder-link of arms to block any who would even dream of passing across the double line of expectation. And so we trail behind, absorbing the language of their traversal. Three more selections by the bandleader, including the flowy sojourning of “Fading Sorrow” (a yielding stage for Kurkiewicz’s soloing) and the sparkler-to-fireworks groove of “L’Amour Fou,” along with Lovano’s “On The Other Side,” complete the in-group compositional picture. The latter tune unfurls a veritable tapestry from the tenorist’s bell and pictures the synergy of ears and fingers required to pull off this collaboration. Carla Bley’s “Vashkar” gets two treatments thereby. In keeping with its ever-deepening roots, and nourished by five decades of interpretation, the quartet taps into its historical embeddedness.

If these are the album’s bricks, then its mortar is mixed in freely improvised material. The nine-minute “Cadenza” is the most cohesive of the bunch, metaphysically speaking. Its balance of gentility and strength is downright beautiful, as is the linear unfolding of “Arco.” Where one moment might breed shimmering near-stillness and the next a fibrillation of darkness, neither mood dominates. Instead, the musicians follow where they are led without struggle. One hears it just as vividly in the nocturnal slink of “Stray Cat Walk” as in the restless leg syndrome of “A Glimpse.” 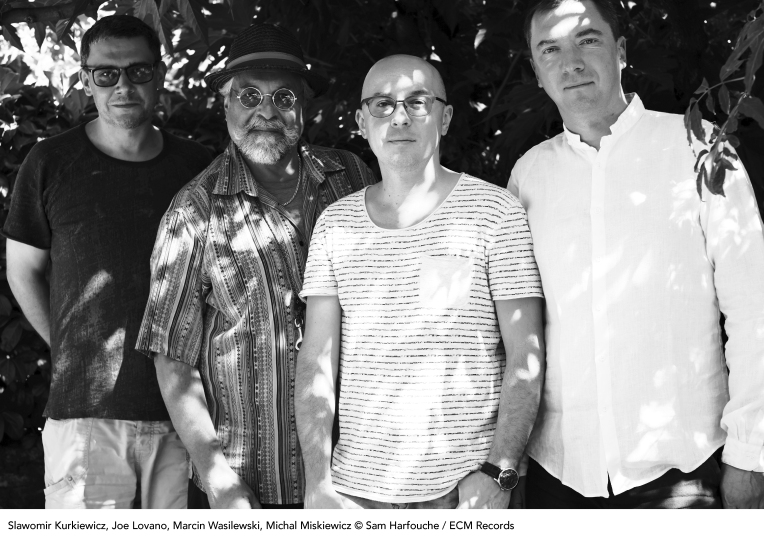 What really distinguishes this record, however, is the apparent gap between the trio’s interlocking poetry and Lovano’s hard-won prose. What at first may seem to be a disjunction actually opens up a space that can only be filled by the listener. By inserting ourselves into the equation, the proof becomes clear: our presence has been desired from inception to execution, our variable the final piece. And with that completion, we emerge on the other side of the equals side having carried the one of experience.