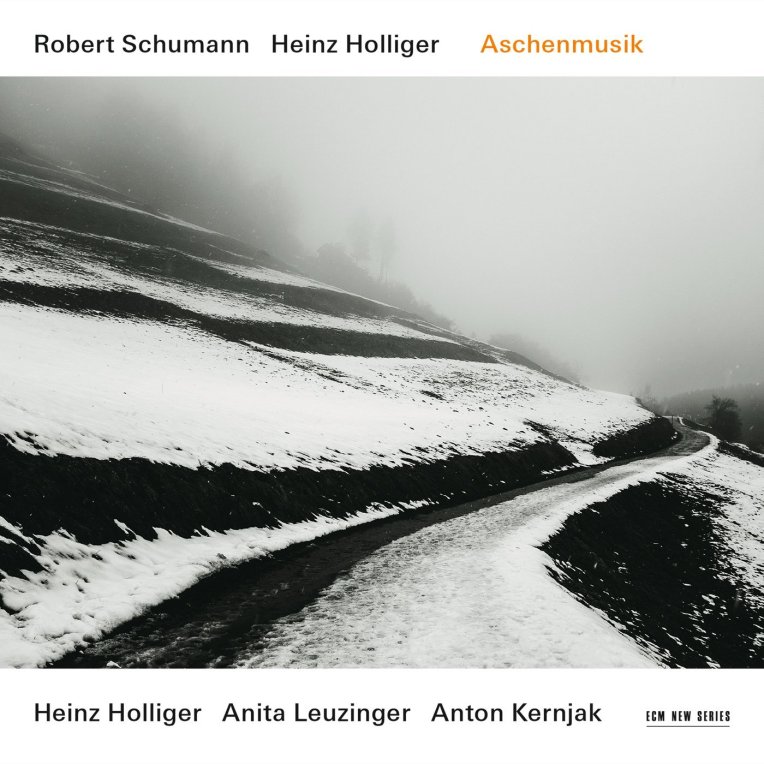 The solar system of Swiss oboist and composer Heinz Holliger has always thrived in a clockwork universe of innovation, but Aschenmusik may just be his most super nova yet. This second major ECM reckoning with the legacy of his much-admired Robert Schumann not only follows in the footsteps of Romancendres but also retreads them with finer shoes. By paying homage to Schumann’s Five Romances of 1853, forever lost to flames by wife Clara’s own consignment, Holliger works through personal frustrations over unrecoverable music by fleshing out the body of its ghostly narrative—the only indication that remains of its certain brilliance.

Romancendres is written for the same combination of cello and piano, and in this expanded version opens the ears to further allusions and cryptographies. Both instruments push their harmonic boundaries, thereby revealing—if not also reveling in—Holliger’s inner turmoil over the loss of Schumann’s score. Cellist Anita Leuzinger walks a tightrope, which like an electrical line through pruned trees carries energy powerful enough to kill. The cello’s vocal qualities and the piano’s percussive are magnified to the point of vulnerability, as emphasized in the fractures and tremors of the latter movements. Yet none of it approaches the masterstroke of the tensile second, in which pianist Anton Kernjak tinkers with a vessel that is constantly being broken by the Leuzinger’s need for sailing. The underlying now becomes the overlying and spins the globe not on an axis of poles but equator. In this decidedly rhythmic piece the piano is beaten, struck, and plucked while the cello ascends microscopic ladders and leaves only water-drop pizzicati to show for its swan dive.

Surrounding this modern morsel are some of Schumann’s latest and greatest, of which the Six Studies in Canonic Form, Op. 56, are a delight to hear in such fine company. Holliger, who here plays the violin part on the reedier oboe d’amore along with Leuzinger and Kernjak, makes a convincing case for these neglected masterworks. More than studies, they are fully matured bodies of exceptional beauty and proportion that effortlessly shine Baroque counterpoint through the foliage of Romanticism. Some are more playful and have an air of the salon, while others are gravid, tonic. Still others are more bucolic, but ever aware of the physical relationships between instruments. The marching fifth receives a particularly artful navigation of pianistic harmonies and rhythm changes, while the elegiac sixth ends on a sigh.

The Three Romances for oboe and piano, Op. 94, showcase Holliger’s peerless tone on the oboe. In these pieces he navigates an ocean swell of piano, its tidal differences yielding the wreckage of a crumbling mind. The insistent, even desperate, quality of the music speaks of an unrequited love that yearns to jump across vast stretches of barren landscape and straight into the heart of one who decomposes beneath it. The final movement unfolds like a map to a very different territory, leaving two shadows for every ray of light.

The second movement of the F-A-E Sonata, excised from a four-part exercise written in collaboration with Johannes Brahms and student Albert Dietrich, is an extant Romance. In this arrangement for oboe (originally violin) and piano, its lilting poetry serves as a bridge into Schumann’s First Violin Sonata, Op. 105, played here on cello. Yet even the glorious first and final movements can do little to conceal the darkness encroaching on Schumann’s cells. Such dynamic realism is not a fight against fantasy but an acknowledgment of its necessity. The central Allegretto follows an arc-like text, which the musicians read with such fluency and through which they relay objective punctuation and subjective expression.

True to the music, in which depth is to be found within the score, not around it, engineer Andreas Werner foregoes studio ornaments in favor of something less mitigated. Having deftly centered Holliger’s oboe on Ich hatte viel Bekümmernis and allowed the violin of Thomas Zehetmair and viola of Ruth Killius to reach out with so much of their spirits intact, Werner was an ideal choice for the present recording. Schumann’s art proves its centrality, activating as it does so much of what makes us live, even when we are no longer around to be aware of living.