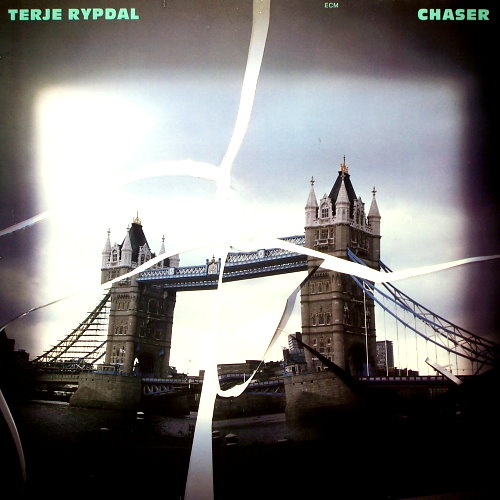 1985’s Chaser finds Norwegian guitarist Terje Rypdal in cahoots with drummer Audun Kleive and bassist Bjørn Kjellemyr. From what I can gather, even some die-hard Rypdal fans are turned off by this one. I can only scratch my head at such reactions, because for me the results are powerful and memorable. Rypdal’s strong-armed phrasing makes the nine-minute opener, “Ambiguity,” a bitter piece of chocolate indeed, but Kjellemyr’s caramel center gives us just the sweetness we need to balance it out. It takes a few minutes to accustom oneself to the sound, but once the rock grabs hold it is difficult to deny. The trio shifts gears with “Once Upon A Time,” which sounds like a film noir that never materializes, if only because there is no one around to populate it. It is the slow blaze of a metal barrel fire pit, a cityscape obscured by sewer steam. For “Geysir,” Rypdal hooks his fluid anchor through a snaking Eberhard Weber-like bass, finding light, cold and subterranean, in every echo. The nighttime feel of “A Closer Look” ports us into “Ørnen,” a deep spiral of hard-won energy—the badlands compressed into 6.5 minutes of emotive genius. Also masterful is the title track. This tender ode to art rock evokes youth and electricity, charging us for the keening embrace of “Transition” and on through “Imagi (Theme),” this last a flexing muscle through which the band separates strength into chains of non-strengths, looking past the façade of power to the surrender that begets it.

Rypdal has singlehandedly honed his axe into an exacting, if serrated, edge. Forged in fire and ice, his sound sings as it lives: nakedly and brightly. This is without a shadow one of Rypdal’s best and belongs alongside such classics as Descendre and his self-titled debut on the throne of his craft. Due to its wide range, to which one finds touchpoints in the work of guitarists as diverse and Buckethead and Bill Frisell, this is as broad a portrait as one can expect to find of a consummate artist who has, in ECM, found a loving home.